Did anyone realize the Chinese were putting up a space station of their own by 2011?

Neither did I, and during a recent space exposition held in South Korea, the Chinese had some pictures and models on display.

If you squint real hard, you may notice a lot of resemblence to 1980s Soviet tech.

I wonder if Art Dula, CEO of Excalibur Almaz is interested in renting some space from the Chinese on their station. Or dock their modules together.

The tech should match.

These Chinese space station concepts were presented by China Manned Space Engineering deputy general designer Wang Zhonggui at International Astronautical Congress in Daejeon, Korea on 15 October. The space station would be about 60tons and would be operational from 2020 with Shenzhou providing crew transport and cargo spacecraft that will use structural technology from China’s rednezvous and docking test vehicle Tiangong that will be launched in 2011. Zhonggui also explained to Fligthgloal that a Chinese manned Moon mission was under discussion by the space programme’s scientists though no timeframe for any mission had been discussed . 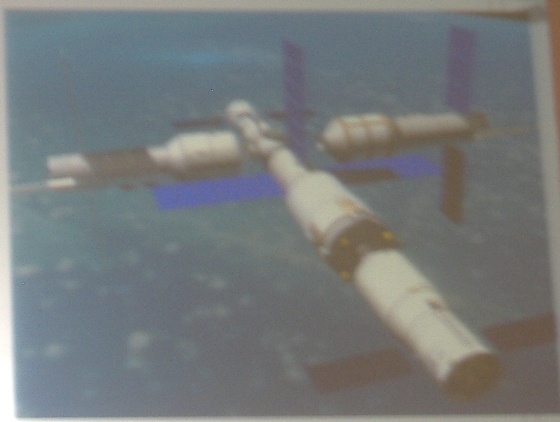 Just to make the above official, check this out from the nasaspaceflight forums:

China has started developing the Long March 6 carrier rockets for its space programs, the China National Space Administration announced on its official website.

The Long March 6 rockets will be non-toxic and pollution-free while featuring a number of new technologies used for the first time in China, according to the administration.

The Long March 6 rockets are expected to be ready for blast off in 2013, it said.

The rockets will be designed by the China Aerospace Science and Technology Corporation, developer of the Shenzhou VII spacecraft, from which Chinese aeronauts carried out the country’s first space walk in 2008.

The payload capacity of the Long March 6 rockets is not revealed. Neither are specific space programs the rockets are to be involved in.

China aims to set up a simple space lab in 2011 and a manned space station in 2020. It also intends to go further in space and has set its eyes on a moon landing.

I think it’s sad that the American Federal Empire might be giving up its civil human spaceflight program and relying on foreign commercial services.

It just goes to show that the globalist regime is winning and there’s a lot of behind the scene corrupt deal-making is going on.