SETI didn’t have it’s start in 1960 with the venerable Frank Drake with his Project Ozma.

Apparently, a version was tried in 1924 that corresponded with a close approach to Mars: 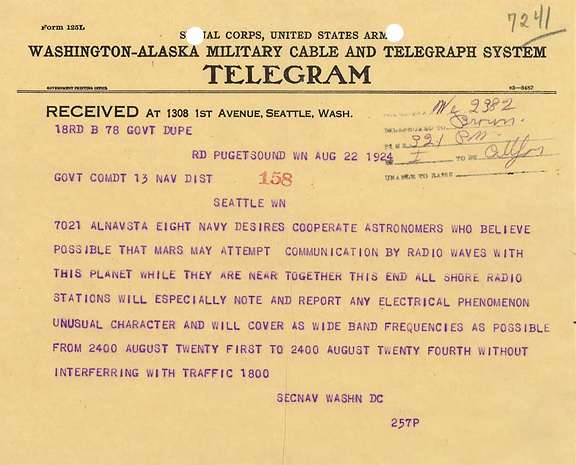 “Here’s a 1924 telegram from then Chief of U.S. Naval Operations, Edward W. Eberle, instructing all Naval stations to monitor the airwaves for any unusual transmissions due to anticipated contact from Martians. August 22nd of that year was witness to the closest Mars opposition since 1804 (a mere 55,777,566 km), and as such provided desirable conditions in which to receive radio signals from the Red Planet. The man tasked with clearing the airwaves – a Professor David Todd – somehow managed to persuade both the Army and Navy to report any findings for a three day period, but failed to silence the country’s private radio broadcasters for even two days. Needless to say, the three day exercise produced nothing but static.”

There was still a concensus then that Mars still harbored intelligent life.

And folks say there still is.

Government-sponsored SETI — In The 1920’s