When are missiles ‘not’ missiles?

When they fly over Canada of course!

Residents of a small coastal Newfoundland community are wondering if several objects shaped like “huge, oversized bullets” seen soaring through the sky on Monday evening were missiles.

“I went to take a picture of the sunset and when I went to do it, I saw these objects in the sky,” said Darlene Stewart, a resident of Harbour Mille, N.L., who, with her boyfriend, said she watched one missile-like object for 10 minutes, snapping several photos before the mystery projectile disappeared from view. “At first I didn’t have a clue until we looked through the binoculars, but we still weren’t quite sure but what we’ve seen from movies … it looked like a missile.”

Government officials weren’t saying on Wednesday what the objects might have been, but the mystery caught the attention of news outlets and police in Newfoundland.

“We confirmed that it was something,” Sergeant Wayne Edgecombe told CBC News on Wednesday. But he wouldn’t reveal what the investigation uncovered.

A grainy photo shot by Ms. Stewart shows a tube-like object flying at a 45-degree angle to the left against a grey sky, with an orange flame trailing behind. Ms. Stewart said she saw two other similar objects on the horizon, including one that appeared to be flying straight up into the air.

Neighbour Emmy Pardy also saw the objects from her balcony and says she was afraid they might hit land.

“With the naked eye, it kind of looked like a huge, oversized bullet,” said Ms. Pardy, 47, who is the town’s postmaster. “It made me feel a bit uneasy because knowing that there were three of them out there, I was worried something was going on out in the bay … I was scared about where they would land.”

She says an RCMP officer called her at home twice and confirmed her suspicion that what the three neighbours saw were in fact missiles and were fired from the French islands of St. Pierre and Miquelon, about 25 kilometres off the southern coast of N.L.

“[The officer] said it was a missile and it was sent off over the French islands, and it was set off by the army over there,” Ms. Pardy said.

Yesterday however, RCMP spokesman Sergeant Andrew Buckle would not confirm the sighting was a missile. “The investigation is ongoing and we will be working with our various partners,” he said. “At this point it is not a criminal investigation so we will be doing very minor checks on it.”

Captain Kendra Allison, a spokeswoman for the Department of National Defence, told the National Post there were no planned Canadian missile exercises off the eastern seaboard Monday evening.

“We don’t see any threat to Canada at this time based on the sightings,” she said. “As far as we’re concerned, things are as per normal.”

A NORAD spokesperson also confirmed that the United States had no planned missile activity of any sort in the area.

David Charbonneau, a spokesman for Public Safety Canada, said the government was aware of reports of public sightings of unidentified objects in the sky off the coast of Newfoundland, but referred all questions to the RCMP.

On Wednesday morning, the French military confirmed it had completed submarine-based missile testing off the northwest coast of France. The testing concluded at 4:55 a.m., Newfoundland standard time, but there was no confirmed start time. The test was the first in a series of six planned in 2010 for the M51 nuclear missile.

According to the French military, the M51 has a range of approximately 10,000 kilometres. The distance between the test site in Audierne Bay, France, and Harbour Mille is only 3,800 kilometres.

François Delattre, the French ambassador to Canada, who was at the National Post’s offices on Wednesday on unrelated business, appeared to have little knowledge of the incident.

“I have just arrived in Toronto, I am sorry I have no comment,” Mr. Delattre said.

Alex Morrison, a military analyst at Dalhousie University’s Centre for Foreign Policy Studies, said the photo taken by Ms. Stewart appears to be that of a missile and suggested it could have come from a submarine.

“It would surprise me if the French or Americans were going to be conducting missile shoots in that area that they would not have told the Canadian government,” he said, adding that he’s never heard of French military forces being deployed to the islands of St. Pierre and Miquelon.

“I don’t think there’s any sizeable military there so it would lead me to believe that it might be a sea launch,” Mr. Morrison said.

“It may well be that the agreement with the Canadian government says that any public statements made will have to be made by the government doing the firing. There’s a whole bunch of maybes.”

Liberal MP Gerry Byrne, who represents the Newfoundland riding of Humber-St. Barbe-Baie Verte, told CBC News that with Parliament prorogued, he is left with a number of unanswered questions about any possible military operations in the area.

“There’s a credible body of evidence that suggests there’s something spectacular happened off of our shore,” Mr. Byrne said. “Before this goes any farther, I think the government needs to actually respond very quickly with a straightforward, factual statement.”

He said he would question the ministers of defence, transport and public safety about the incident if the House of Commons was sitting.

“If indeed this was a man-made object, that it was a missile, was there any potential risk to health and safety from collateral damage should the missile fire have failed?” 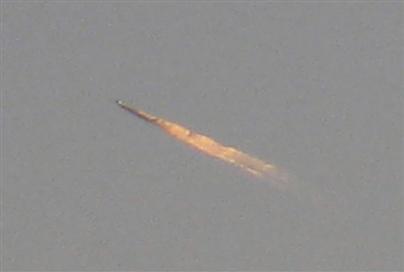 What’s going on here? Missiles that aren’t missiles, the British Royal Society discussing alien life, the light show in Norway a couple of months back that was supposedly a ‘missile’ and giant metal spheres orbiting the sun?

Are aliens letting us know they’re here, or are they something related to us?