On March 7, 2010, the ESA (European Space Agency)’s probe Mars Express performed a fly-by of Mars’ moon Phobos to take pictures and check its mass using radar. The camera was able to measure a field 15 feet across, quite an accomplishment on a small object 15 miles long. The amazing feature of Phobos however is its layered striations and lateral pockmarks: 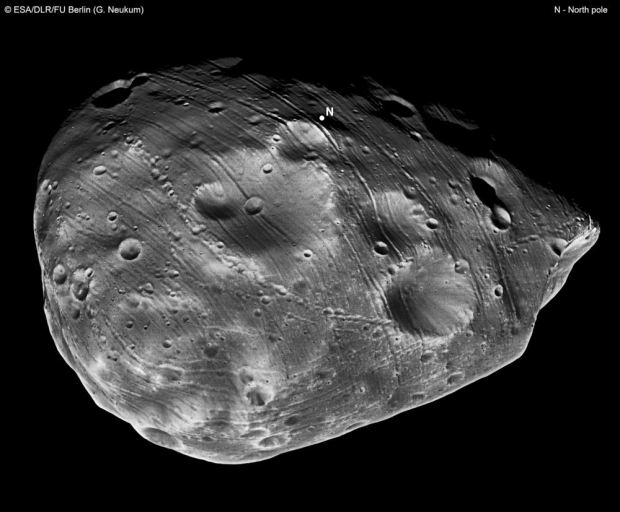 Quite interesting, is it not? Not surprisingly, that purveyor of Lunar crystal cities and Mars faces, Richard Hoagland, points out these features prove that Phobos is artificial!

To be fair however, Hoagland uses the probe’s radar readings to measure the moon’s mass to make his point. Amazingly, he could actually have something to go on here!:

[…]By extremely careful measurements of the actual “radio frequency drift,” recorded during these Phobos “close-approaches,” and by then plugging that data into sophisticated ESA computer models of Phobos interior mass distribution, each varying slightly, and designed according to “Newtonian and Einsteinien Laws of Gravity” … the ESA folks expected to not only be able to measure accurately the overall MASS of Phobos far more precisely than ever before … but, even more importantly–

For the first time, resolve”how” that detected mass was arranged — INSIDE — as measured against the Mars Express “gravity tracking data.”

Normally, even the first results of such a delicate experiment would “wait weeks before it was posted … if it ever was”; ESA this timeposted the “early Doppler results of this ‘super close’ Phobos March 3rd pass” … on March 9th–

Barely one week after the fly-by itself!

And then — described in detail, the science behind the published radio-tracking graph (below):

“ … The Mars Express Radio-Science team, led by Martin Pätzold (Cologne University), has performed a preliminary analysis of the radiometric data recorded during the evening of closest approach, 3 March 2010 …

“The blue line is the expected frequency change assuming the mass of Phobos, as measured during a previous flyby, is evenly distributed throughout the moon’s interior. There are clearly small differences between the blue and grey lines. The challenge now for the Radio-Science team is to dig into these small differences to pries out information on the mass distribution. “The real work starts right here,” says Pätzold.“It may take a few weeks for the extraction of precise information on the interior of Phobos,” says Tom Andert, from Munich University [emphasis added] ….”

One of the responders to this post, on the official ESA “Phobos Blog,” shrewdly observed—

Posted by: Daniel Fischer • Thanks for sharing these data! • reply

Thanks to the Cologne people and ESA for sharing these hot non-imaging data, even without vertical scales – a clever (and accepted) way in showing success without compromising scientific details.

Though, as the total mass of Phobos and C/A distance are both known, reconstructing the ‘missing’ Hertz residuals scale in the 1st plot should be possible for any physicist, right [emphasis added]?

By putting out the actual raw “gravity tracking” data this early, ESA was (apparently) “hedging its bets”; if it WAS planning to release ALL the data, from ALL the experiments carried out during this unique “dozen Phobos fly-by orbit sequence …” — revealing that it IS an “ancient, manufactured object” (as I was beginning to seriously suspect …), this was a MAJOR, additional step in signaling thatultimate intention ….

Providing the perfect segue into what came next–

I’ve just heard that the technical paper discussing the mass and density of Phobos, as determined during the 2008 flyby, has been accepted by Geophysical Research Letters. The abstract is:

We report independent results from two subgroups of the Mars Express Radio Science (MaRS) team who independently analyzed Mars Express (MEX) radio tracking data for the purpose of determining consistently the gravitational attraction of the moon Phobos on the MEX spacecraft, and hence the mass of Phobos. New values for the gravitational parameter (GM=0.7127 ± 0.0021 x 10-³ km³/s²) and density of Phobos (1876 ± 20 kg/m³) provide meaningful new constraints on the corresponding range of the body’s porosity (30% ± 5%), provide a basis for improved interpretation of the internal structure. We conclude that the interior of Phobos likely contains large voids. When applied to various hypotheses bearing on the origin of Phobos, these results are inconsistent with the proposition that Phobos is a captured asteroid [emphasis added] ….

No … this was NOT “the rest of the radio-tracking results” from the March 3rd fly-by, that we were all eagerly anticipating ….

From data acquired two YEARS earlier by Mars Express … back in 2008!!

Another major clue that … the political goals of the current, ultra-close Phobos “fly-by campaign” were predicated on the provocative results discovered earlier … in the 2008 fly-bys ….

Which, quoting from the just-published abstract–

” … provide meaningful new constraints on the corresponding range of the body’s [Phobos’] porosity (30% ± 5%), [and thus] provide a basis for improved interpretation of the internal structure. We conclude that theinterior of Phobos likely contains large voids. When applied to various hypotheses bearing on the origin of Phobos, these results are inconsistent with the proposition that Phobos is a captured asteroid[emphasis added] …”

“Inconsistent … that Phobos is a captured asteroid …?”

There … the “ticking time bomb to Disclosure” —

For, Phobos IS — according to these officially-published ESA 2008 Mars Express tracking measurements–

Precisely the same result … as the Soviets reported from their own “mysteriously lost” Phobos-2 Mission — back in 1989 (below)!

Which, of course, is how we at Enterprise have KNOWN about “the reality of an artificial Phobos …” since “Bush 1” … for 21 years–

From correctly interpreting official Soviet spacecraft findings at Mars, in 1989 — data published openly in “the most prestigious science journal in the world,” Nature — of the observed, artificial nature of the evidence transmitted back from the Soviet’s first “Phobos Mission” … Phobos-2 … before it “disappeared.”

Findings which now — from ALL the political clues and “dots’ we’ve been publishing here at Enterprise on “real disclosure,” for months on end — are about to be openly confirmed by ESA [….]

I have serious doubts about any “disclosure.” The word leaves a bad taste in my mouth in that the Euros, or any world government for that matter will admit finding any exo-archeological artifact, no matter how old, dead or benign the object appears to be.

But if true, this would be the type of proof the SETI types need to prove their hypothesis.

I don’t think so though. They can be just as dogmatic and extreme as the above!

For The World Is Hollow…