Yesterday in Washington D.C. there was a meeting of former military personnel who used to work at secret nuclear missile launch sites.

And their reason for meeting? To let the public know that UFOs (their versions/opinions of what UAPs are) might be tampering with the nuclear defences of the West in the US and the UK: 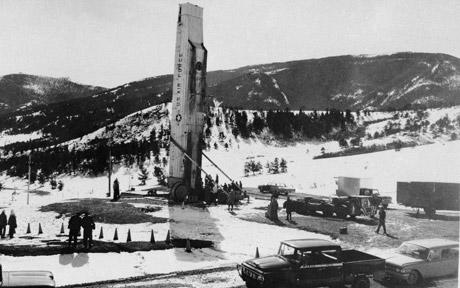 Six retired officers and one former non-commissioned officer claim to have gathered witness testimonies from more than 120 military personnel revealing the infiltration of nuclear sites by aliens as recently as 2003.

Captain Robert Salas, a former Intercontinental Ballistic Missile Launch officer, said he was on duty during one missile disruption incident at Malmstrom Air Force Base in Montana in 1967.

“An object came over and hovered directly over the site,” he said.

“The missiles shut down – 10 Minuteman missiles. And the same thing happened at another site a week later. There’s a strong interest in our missiles by these objects, wherever they come from.

“I personally think they’re not from planet Earth.”

He said he was ordered to never discuss it: “The USAir Force is lying about the national security implications of unidentified aerial objects at nuclear bases and we can prove it.”

Colonel Charles Halt said he watched Unidentified Flying Objects directing beams of light into RAF Bentwaters airbase near Ipswich and heard on the radio that they landed in the nuclear weapons storage area.

Col Halt said: “I believe that the security services of both the United States and the United Kingdom have attempted – both then and now – to subvert the significance of what occurred at RAF Bentwaters by the use of well-practised methods of disinformation.”

The group of officers said they would distribute declassified government documents on Monday that would prove there had been alien interference at nuclear weapons sites stretching back to 1948.

Now I don’t know if UFOs are actually ‘alien’ craft, my opinion has changed on this on and off for many years (yeah, I’m kind of wishy-washy) and I don’t know if these people are credible witnesses, but I will tell you I’ll trust a veteran’s word more than I’ll trust other people’s.

Aliens are sabotaging British and US nuclear missiles, US military pilots claim