By dad2059 on September 1, 2010 | 5 Comments
Red Rain is a phenomenon that seems to be rare and has strange properties. Many papers have been written and this one in 2001 by Rajkumar Gangappa, Chandra Wickramasinghe, Milton Wainwright, A. Santhosh Kumar and Godfrey Louis theorize that Red Rain cells when nurtured and incubated actually start to grow.
This is interesting since they also theorize that Red Rain has an interstellar origin:

Following incubation at 121oC for 1 hour and longer, a marked change occurs in the internal appearance of the Red Rain cells (Fig.4 c (i) and d (i)), as small cells appear in the original larger cells. These small cells can be regarded as “daughter cells” having the same morphology as their “mother cells”. The size of the daughter cells ,after 1h exposure to 121oC, ranges from 30 nm to 120 nm in size (Fig 4 c (i), (ii) and b (i), (ii)). The cell wall of these daughter cells is seen to thicken following incubation for 2hours (Fig.5 (i) and (ii)).
In conclusion, the results of the present study clearly establishes that red cells discovered in the Kerala rain, replicate at 121oC and that there is a significant increase in the number of cells after incubation at 121oC. Furthermore, optical microscopy and electron microscopy of post-incubated red cells confirms that these cells are hyperthermophiles. The formation of daughter cells having the same morphology as the mother cells clearly shows that Red Rain Cells are not single endospores, such as those seen in bacteria, such as species of Bacillus and Clostridium.
The optimum growth conditions and upper temperature limit of these cells is yet to be determined. Although autoclaving at 121oC for 20 mins kills most microorganims, some spores of Bacillus and Clsotridium species can resist this treatment and germinate to form vegetative cells when incubated at lower temperatures (Hyum et al,1983,Vessoni,et al.1996). Here, however, we have shown that, unlike heat resistant bacterial spores, Red Rain cells grow and produce daughter calls when incubated at 121oC for 2 hours. The results of these experiments show the remarkable ability of Red Rain cells to grow and replicate at 121oC and thereby supports the hyperthermostability of red cells, as reported by Louis and Kumar (2003); no attempt however, was made to confirm their claims that Red Rain cells grow at 300oC.
The origin of Red Rain, and the cells that it contains, has yet to be discovered, although the results of this study suggest that, since such cells are adapted to growth and reproduction at high temperatures, they likely originate in an extreme environment which is at times exposed to high temperatures; whether such environments occur on Earth, or elsewhere, has yet to be determined. (Emphasis mine).
[…]
While the origin of the red rain cells remains uncertain, the possibility of their astronomical relevance has been suggested in several papers (Louis and Kumar, 2003, 2006). In this connection, the hyperthermophile properties discussed in the present paper and the unusual fluorescence behaviour are worthy of note.
We conclude this section by comparing spectra in Fig 7 with astronomical spectra of a fluorescnence phenomenon (ERE emission) for which no convincing abiotic model is still available, Fig 9 shows normalised ERE emission in several astronomical objects and Fig 10 shows the same emission in the famous Red Rectangle, a nebulosity associated with a planetary nebula (Witt and Boronson, 1990; Furton and Witt, 1992, Perrin et al, 1995, Hoyle and Wickramsinghe, 1996). Although non-biological PAH explanations are still being attempted their success has so far been minimal.
[…]
A spectrum of starlight from a blue star could provide the range of excitaton wavelengths that corresponds to those involved in Fig. [7]. The correspondence of profile and peak fluorescence wavelength between the red rain spectra and the ERE spectrum of the red rectangle is impressive. We conclude this paper with a recollection of an earlier comment published by Hoyle and Wickramasinghe:
“Once again the Universe gives the appearance of being biologically constructed, and on this occasion on a truly vast scale. Once again those who consider such thoughts to be too outlandish to be taken seriously will continue to do so. While we ourselves shall continue to take the view that those who believe they can match the complexities of the Universe by simple experiments in their laboratories will continue to be disappointed.” (Emphasis mine).

A bill has been introduced in the U.S. Senate to ban human-animal hybrid research. Senators Sam Brownback (R-Kansas) and Mary Landrieu (D-Louisiana) have introduced in Congress the Human-Animal Hybrid Prohibition Act of 2009 (S. 1435). With 20 co-sponsors of the measure thus far, Landrieu is the only Democrat among that group.

Dr. David Prentice of the Family Research Council tells OneNewsNow many people will fight against the bill. “There are already scientists who are planning and starting experiments to combine human and animal hybrid embryos for experiment,” he notes.

The bill does not affect use of animals or humans in legitimate research, but would ban creation in the laboratory of part-human, part-animal creatures that would blur the line between the species.

Dr. Prentice says scientists that favor hybrid research believe the experiments will cure disease and be important to medical research, but he says even some scientists involved in embryonic stem-cell research say it will result in nothing useful.

“There’s one scientist who wants to make a mouse with a human brain, or others who want to grow human eggs or sperm in mice and rats for experiments,” Prentice adds.

He fears the experiments will make humans less human and claims proponents are trying to “play God.” “We need to channel science into valid and ethical research, and it’s certainly not these human-animal hybrids,” Prentice concludes.

Yeah, but they might have a hard time keeping this from the military.

Wouldn’t the Pentagon just love an infinite supply of replacement parts for soldiers injured in the field?

Human-animal hybrids would be the ticket and there’s been stories of cattle mutilations in the Southwest for years.

Does gravity change during a total solar eclipse?

Well, after tomorrow we better ask the Chinese:

…be aware of tomorrow’s total solar eclipse, which gets particular attention because six Chinese teams will be monitoring the event to look for the possibility of anomalous gravitational effects. Does gravity undergo a slight change during a total eclipse? The French physicist Maurice Allais noted unusual behavior in a swinging pendulum back in 1954 during the eclipse that passed over Paris that year. Since then, measurements to pin down what is going on have been inconclusive. A New Scientist story provides more background, as does this NASA page, which details subsequent, often contradictory follow-ups.The first step in this kind of investigation is to find out whether the anomaly actually exists. The six Chinese monitoring sites will include gravimeters and pendulums, and will encompass a large enough area (3000 kilometers between those that are farthest apart) that local changes in weather or problems with instrumentation should be ruled out. If General Relativity is in need of a tweak, these results could provide a clue.

This is the first I’ve heard of this anomaly. Wouldn’t it be great if the Chinese discovered some anomalous effect? Would we have to change Einstein’s General Relativity?

I wonder if it’s because the Sun and the Moon appear to be the same size, thus enabling the total solar eclipse effect to begin with?

Hey Dr. Dale Huffman, are you aware of this study?

Here are some ‘ice crystals’ that circled the ISS lately: 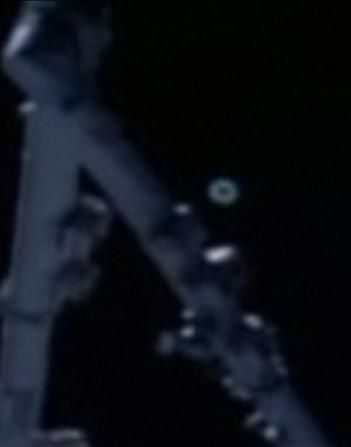 So what are they?

Go here for more photos. Then you tell me.

Can you imagine a future where parents can pick the eye color, hair color, skin color and height of their new baby? Does that sound like some wild dream of the future? Well, the future is now. One Los Angeles fertility clinic is now offering to design babies to the exact specifications of the parents.

The Fertility Institute is calling this new technology “cosmetic medicine”. Do you want your daughter to look like Barbie? Done. Just order up a tall, light-skinned, green-eyed, daughter with blonde hair and the clinic will do the rest.

This technology is based on something called “pre-implantation genetic diagnosis”, or PGD, which doctors have been using the last few years to identify potentially deadly diseases in embryos. The technology has become so advanced that now doctors can not just spot potential diseases, but they can actually get enough information from an embryonic cell that they can identify thousands of characteristics of a single embryo.

Well, this day has finally arrived. Genetically engineered human beings and designer children born to parents who can afford to pay the fees.

And make no bones about it, this will happen.

The next question is; “Will this new technology be made available to the masses?”

What do you think?

In a related note, Technological Singularity advocate Michael Anissimov’s blog Accelerating Future has a recent post in which a commentor mentions ectogenesis; The growing of a fetus in an artificial womb outside of a biological body.

This poses an ethical question that if the technology becomes economically viable, will abortions due to unwanted children become illegal again?

And if the reasons for abortion become moot, who, or what will raise these children if the parent(s) refuse to raise them?

Who pays the cost of growing the fetus to maturation, the State/taxpayers, or the unwilling parent(s)?

These issues, like the designer children, are already here.

Witness the Octo-Mom media spectacle/circus/carnival and the results so far.

Response to Wesley J. Smith on the IEET Conference

One of the main reasons I started this blog originally was to discuss Transhumanism and the ramifications for society.

I have strayed from that over the past 22 months because I found other subjects that seemed more important at the time. And issues of the NWO, esoteric symbolism, UFOs and alternate history will continue to draw my attention.

But needless to say, I still consider myself a transhumanist in an offhand kind of way because I’m still living and breathing due to technologies that were once considered impossible 30 short years ago. There were no ghosts, evil spirits, grey aliens, tricksters, possessions, priests, ministers or exorcisms involved in keeping me alive.

And maybe a little luck.

Now according to the Multiverse Theory, we inhabit many parallel Universes at once, in fact, infinite.

Many possibilities exist at the same time, all it takes is for an event to be witnessed/measured in order to make it “real.” And just that very act alone causes an infinite number of “branches/possibilities” to come about.

Could there be an untold amount of parallel “Universes” in which I didn’t survive the operation?

According to many quantum theorists, yes.

Is this “woo-woo” mysticism writ large? A secular religion? Impossible?

Or just plain bullshit to calm the sheeple who couldn’t understand it anyway?

Many other theorists say yes to that.

If there really is such a thing as Transhumanism, perhaps these fundemental questions of existence can be answered.