The commercial spaceflight company Golden Spike – which aims fly private missions to the moon by 2020 – has teamed up with the New York-based firm Honeybee Robotics to design robotic rovers for the planned lunar expeditions.

“We’re very proud to be working with Honeybee, which has tremendous experience and a record of successful performance in the development of flight systems for NASA,” Golden Spike President and CEO Alan Stern said in a statement last month.

Golden Spike first announced its goal of launching two-person commercial flights to the moon in December 2012. To boost the scientific output of the expeditions, the company plans to send unmanned rovers to the moon ahead of the crew to collect samples from a wider area than the crew will be able to travel from their landing pad. The rovers will then meet up with the crew’s spacecraft once it arrives, according to the mission plan.  [Golden Spike’s Private Moon Mission Plan in Pictures]

“Honeybee brings a unique body of knowledge and skills to help us augment the capabilities of human exploration missions with advanced robotics,” Clive Neal, a researcher at the University of Notre Dame in Indiana and chair of Golden Spike’s lunar science advisory board, said in a statement. “Their participation is a key step forward in helping Golden Spike change the paradigm of human space exploration, through the development of highly capable lunar exploration system architecture for customers around the world.”

Honeybee Robotics has been designing planetary sampling devices for clients including NASA and the US Department of Defense for more than 25 years, and has contributed to the last three of NASA’s Mars landers: The company designed the rock abrasion tool for NASA’s Mars Exploration Rovers Spirit and Opportunity, as well as the icy soil acquisition device (or “Phoenix Scoop”) for the U.S. space agency’s Phoenix Mars lander, and the sample manipulation system and dust removal tool for the Curiosity rover.

Golden Spike officials initially priced the missions at $1.5 billion per person, but has since estimated that the cost could drop down to about $750 million with the help of media coverage and sales of merchandising rights of the missions, Stern told reporters last year at the 29th National Space Symposium in Colorado Spring, Colo. Potential moon flyers include leaders of nations, large corporations, and independently funded individuals.

The companies plan to complete preliminary tests of their rover design by mid-2014.

The cost of the landers and other equipment were the long poles in the tent of NASA’s old Constellation program.

It will be interesting to see if Golden Spike’s plan will work to bring these expenses down. I surely hope so.

The Apollo space missions to the Moon were the last Beyond Earth Orbit human explorations of Near space, the last being in 1972.

The main reasons being lack of public interest and funding, so any explorations beyond the Near Earth regions have been robotic due to their relative financial benefits and nobody worries much if a robot dies instead of a human being.

That issue might change in the future according to a paper written by Ian Crawford, a professor of planetary sciences at Birkbeck College (London):

…Out of necessity, all our missions to the outer system have been unmanned, but as we learn more about long-duration life-support and better propulsion systems, that may change. The question raised this past weekend in an essay in The Atlanticis whether it should.

Ian Crawford, a professor of planetary sciences at Birkbeck College (London) is the focus of the piece, which examines Crawford’s recent paper in Astronomy and Geophysics. It’s been easy to justify robotic exploration when we had no other choice, but Crawford believes not only that there is a place for humans in space, but that their presence is indispensable. All this at a time when even a return to the Moon seems beyond our budgets, and advanced robotics are thought by many in the space community to be the inevitable framework of all future exploration.

But not everyone agrees, even those close to our current robotic missions. Jared Keller, who wrote The Atlantic essay, dishes up a quote from Steve Squyres, who knows a bit about robotic exploration by virtue of his role as Principal Investigator for the Spirit and Opportunity rovers on Mars. Squyres points out that what a rover could do even on a perfect day on Mars would be the work of less than a minute for a trained astronaut. Crawford accepts the truth of this and goes on to question what robotic programming can accomplish:

Landing astronauts is something we’ve only done on the Moon, but the value of the experience is clear — we’ve had human decision-making at work on the surface, exploring six different sites (some of them with the lunar rover) and returning 382 kilograms of lunar material. The fact that we haven’t yet obtained samples from Mars doesn’t mean it’s impossible to do robotically, but a program of manned exploration clearly points to far more comprehensive surface study. Crawford points out that the diversity of returned samples is even more important on Mars, which is more geologically interesting than the Moon and offers a more complicated history.

Image: Apollo 15 carried out 18.5 hours of lunar extra-vehicular activity, the first of the “J missions,” where a greater emphasis was placed on scientific studies. The rover tracks and footprints around the area give an idea of the astronauts’ intense activity at the site. Credit: NASA.

Sending astronauts by necessity means returning a payload to Earth along with intelligently collected samples. From Crawford’s paper:

Robotic explorers, on the other hand, generally do not return (this is one reason why they are cheaper!) so nothing can come back with them. Even if robotic sample return missions are implemented, neither the quantity nor the diversity of these samples will be as high as would be achievable in the context of a human mission — again compare the 382 kg of samples (collected from  over 2000 discrete locations) returned by Apollo, with the 0.32 kg (collected from three locations) brought back by the Luna sample return missions.

It’s hard to top a yield like that with any forseeable robotic effort. Adds Crawford:

The Apollo sample  haul might also be compared with the ≤ 0.5 kg generally considered in the context  of future robotic Mars sample return missions… Note that this comparison is not intended in any way to downplay the scientific importance of robotic Mars sample return, which will in any case be essential before human missions can responsibly be sent to Mars, but merely to point out the step change in sample availability (both in quantity and diversity) that may be expected when and if human missions are sent to the planet.

Large sample returns have generated, at least in the case of the Apollo missions, huge amounts of refereed scientific papers, especially when compared to the publications growing out of robotic landings. Crawford argues that it is the quantity and diversity of sample returns that have fueled the publications, and points out that all of this has occurred because of a mere 12.5 days total contact time on the lunar surface (and the actual EVA time was only 3.4 days at that). Compare this to the 436 active days on the surface for the Lunokhods and 5162 days for the Mars Exploration Rovers. Moreover, the Apollo publication rate is still rising. Quoting the paper again:

The lesson seems clear: if at some future date a series of Apollo-like human missions return to the Moon and/or are sent on to Mars, and if these are funded (as they will be) for a complex range of socio-political reasons, scientists will get more for our money piggy-backing science on them than we will get by relying on dedicated autonomous robotic vehicles which will, in any case, become increasingly unaffordable.

Will the Global Exploration Strategy laid out by the world’s space agencies in 2007 point us to a future in which international cooperation takes us back to the Moon and on to Mars? If so, science should be a major beneficiary as we learn things about the origin of the Solar System and its evolution that we would not learn remotely as well by using robotic spacecraft. So goes Crawford’s argument, and it’s a bracing tonic for those of us who grew up assuming that space exploration meant sending humans to targets throughout our Solar System and beyond. That robotic probes should precede them seems inevitable, but we have not yet reached the level of artificial intelligence that will let robots supercede humans in space.

Currently in mainstream space activities, commercial companies such as SpaceX, Blue Origin, Virgin Galactic, Sierra Nevada, etc., are taking the lead in the future exploration of Near Space and the Solar System vice any future explorations by NASA, inspite of what parochial politicians in certain states try to do in Congress.

Of course this precludes any gains made by secret black projects in the military-industrial-complex in the area of any secret space programs.

Maybe that’s one of the reasons politicians aren’t too worried about sending manned NASA missions back to the Moon?

Reasons for a Human Future in Space

Many thanks to Paul Gilster and his great site Centauri Dreams.

Finally some coherent Chinese moon probe (Chang’e 2) photos are released, along with one of the Chinese bosses of course.

Released with some fanfare (that’s the Chinese premier, Wen Jiabao, there. [Editor’s note: originally had Jiabao as the “head of state”; that would actually be the president, Hu Jintao, not the premier, Jiabao]), the images get more or less straight to the point: they’re of the Bay of Rainbows (Sinus Iridium), which China has slated to be the potential landing location of it’s Chang’e-3 rover mission.

The images include a 3-D map, and have a resolution of ~1.3 meters (for comparison, NASA’s Lunar Reconnaissance Orbiter has resolution up to 1 m 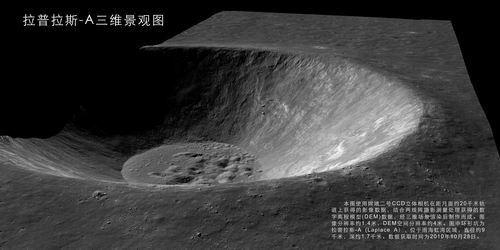 Check out the official Chinese release page for all the images 🙂 (A rough translation notes the last image is labeled as “antarctic”, so it’s unclear if that’s also a Bay of Rainbows crater, or one near the lunar south pole.)

I find the crater at the Lunar South Pole kind of interesting, kind of looks like a blast area for propulsion.

Which feeds into the artificial Moon theory.