UFO Round-Up and Staring At Goats

Time for more UFO stuff to round out the week and to motivate you good folks to keep your eye on the sky!

Is this technology or animal. You decide! 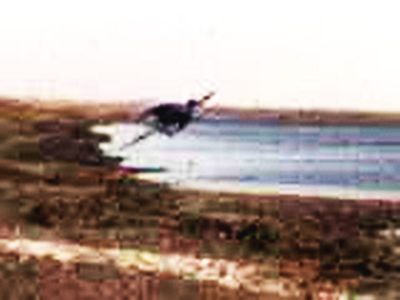 A man living in the village El Nihuil reported seeing an object that he could not identify. He took pictures of it with his cell phone and believes it’s an UFO.

The man decided to protect his identity for fear of public opinion. Although reluctant to make public the episode, a friend persuaded him to publish it in a local Journal and after the promise to safeguard his identity.

It all started last Saturday, around 3 o’clock in the afternoon, near the Nautical Club, when the man went to the coast to check on the conditions for fishing.

He said that while he tries to photograph the object with his cellphone, it began to emit a kind of buzz and, as if it blew hard on the water, stirring, begins to rise. At that time, and while the object rises, he managed to take photographs of the strange silhouette.

The small town is in Argentina. It doesn’t get spread around much up here in North America, but South America has been a hot-bed of UFO activity for decades.

Does look like some kind of animal, doesn’t it?

From the UFO Casebook:

While taking images of persistent contrails (chemtrails) over the Los Angeles basin in October, 2006, I captured these two photographs of a very anomalous object producing a trail that essentially spanned the entire western sky.

The pictures were taken with a Nikon Coolpix and a Nikon spotting scope with a focal length of approximately 800mm. Looking through the viewfinder, I was able to see a bright object at the head of the trail which didn’t appear to be a conventional aircraft.

Upon transferring the images to my computer, I realized I had captured something unlike any other images of UFOs I had ever seen.

My own suspicion is that this may be an aircraft utilizing some form of electromagnetic cloaking device which diverts light around the object, somewhat like water flowing around a stone. I would think that such a device would have to be “tuned” or adjusted to varying atmospheric conditions (humidity, temperature, etc) and that when the tuning is not precisely correct, artifacts are visible around the otherwise cloaked aircraft.

This is just my guess, and as to why anyone would be flying such aircraft in a cloaked mode over a population center such as Los Angeles I have no idea.

An optical physicist friend of mine thinks that the trail is not a vapor trail, but is a plasma being produced by the high energy of the object. If anyone else has any theories, I would be interested to hear them. 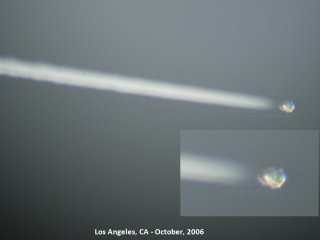 Makes you want to take a closer look at all those supposed ‘jet’ contrails on a nice summer sunset, doesn’t it?

And lastly, how about some cloak and dagger stuff, hmm..?

“The man who reactivated me is… ” Uri paused, then he said, “called Ron.”

I was reading Jon Ronson’s book, THE MEN WHO STARE AT GOATS.

I knew that Ron worked for CIA.

And why Uri Geller may have found himself “reactivated” for the war on terror.

“This is about what happened when a small group of men — highly placed within the United States military, the government, and the intelligence services — began believing in very strange things.”

Thus begins Jon’s Ronson’s disturbing and entertaining exploration of high strangeness infecting the US government in his follow-up to his first book THEM: Adventures with Extremists.

THEM clearly set the tone for Ronson’s unique approach to the sources and methods found in THE MEN WHO STARE AT GOATS — understated shock and awe tempered by a dry sense of humor in all the right places.

When faced with video evidence of alleged mind-control over a small animal, Ronson notes:

“It does seem odd … although I have to say that emotions such as circumspection and wariness are not that easy to discern in hamsters.”

Ronson (who followed in the footsteps of another UK citizen and journalist, Nick Cook of Janes Defence Weekly) was astonished by the fascination high-ranking persons in the United States exhibited over the paranormal. And like Cook and Ronson, who had observed the inexplicable weirdness (which had largely emerged for all to see on the Internet in the 1990s) — I was also curious about what had inspired strange beliefs in the unreal.

Since the mid-1990s I had been exploring far-out science with an eye on future developments.

It did appear that an entire industry had developed around improbable imaginary weapons, but what of the impossible?

All of this, of course refers to the movie “The Men Who Stare At Goats” which delves into the US Army’s studies into ‘psychic’ energy/powers.

Now whether there is any veracity to Geller’s claims that he was ‘reactivated’ for these projects is problematic at best.

Hmm, better ask James Randi before his health declines. Since the US government historically has used such projects during the Cold War, I wonder if Randi has ever considered debunking them?

Thanks to Debris Field for today’s hat tips!

An interstellar ‘GPS’ for future probes?

Pulsars have huge advantages. A deep space satellite network to fix position is a costly option — it doesn’t scale well as we expand deeper into the Solar System and beyond it. Autonomous navigation is clearly preferable, tying the navigation system to a natural reference frame like pulsars. The down side: Pulsar signals are quite weak and thus put demands upon spacecraft constrained by mass and power consumption concerns. So there’s no easy solution to this.

…any other space-time event, on Earth, on the Moon, anywhere in the Solar system or in the solar systems in this part of the Galaxy, has its own coordinates attributed. With present-day technology, this locates any event with an accuracy of the order of 4 ns, i.e., of the order of one meter. This is not an extremely precise coordinate system, but it is extremely stable and has a great domain of validity.

If these numbers are correct, they represent quite a jump over the ESA study cited above, which worked out the minimal hardware requirements for a pulsar navigation system and arrived at a positioning accuracy of no better than 1000 kilometers. ESA is working within near-term hardware constraints and discusses ways of enhancing accuracy, but the report does point out the huge and perhaps prohibitive weight demands these solutions will make upon designers.

Weight demands might not be as much a concern as Paul and others speculate, if probe builders use the proposed nanotechnology previously written about on his site. And using Nature in all her glory isn’t so far-fetched as it seems!

Are UFOs and associated phenomena really supernatural angels and demons fighting over the immortal souls of human beings?

Dave Biedny and Gene Steinberg during this past Sunday’s Paracast (5/31/09) interviewed Christian UFO researcher L.A. Marzulli to find the answer to that question.

I don’t think Marzulli convinced them, but tune in and find out for yourselves!

Mr Geithner is on his first official visit to China, the biggest foreign investor in US treasury bonds.

Ahead of meetings with President Hu Jintao and Premier Wen Jiabao, he said the US and China must work together to fix the global economic system.

Mr Geithner said the US would move swiftly to get its debt under control.

In a speech at Beijing University at the start of his two-day visit, Mr Geithner reassured his Chinese hosts that they need not worry about the estimated $770bn (£475bn) they have invested in US treasuries, a class of US government debt.

“Chinese financial assets are very safe,” he said, drawing laughter from the audience.

Ask these folks how funny things are: