The Iranian Revolutionary Guard recently shot down some UFOs according to them:

“Glowing objects were sighted over the Persian Gulf. IRGC air defense targeted one of the objects successfully, forcing it to plummet and sink in the seas off Boushehr (Province),” said top regional commander, Brigadier Ali Razmjou.

“The three bright objects were detected by our radars when flying over the Persian Gulf Islands of Khark and Khargou,” he added, according to a Monday report posted on IRNA.

Brig. Razmjou explained that when the radars indicated that they were not Iranian aircrafts, the IRGC fired at the three objects. He also added that the fallen objects’ remains have not been found yet.

The exact time and location of the sighting and downing of the weird aircraft has not been announced.

They’re not claiming the UFOs are of extraterrestrial origin and the objects were very likely unmanned spy craft, but the Iranians say they can’t find the remains.

Not that the parties involved, no matter what or whom they are, would claim responsibility anyway.

Media outlets as well as the official government website in Kazakhstan are reporting the surprise discovery of local geoglyphs or ‘Nazca Lines’.  Geoglyphs are drawings created on the ground by arranging stones or removing the top layers of earth. These designs typically cover large areas. The most famous geoglyphs are those found in the Nazca desert in Peru. These show hummingbirds, spiders, monkeys, fish, sharks, llamas, and lizards.
The Kazakhstan Geoglyphs (photo above, thanks to photojournalist N. Dorogov) appear to depict a humanoid figure wedged between two unusual structures. The drawings are located in the remote Karatau Mountains in South Kazakhstan.
Geoglyphs are of interest to UFO researchers, some of whom believe they might be messages or markers created by ancient people for the benefit of visiting extraterrestrials.  It is alleged by these UFO scholars that in times of distress these were a way of asking ‘Star Gods’ to return and Assist these early societies, however this hypothesis has not been proven.
It is expected that some scholars of extraterrestrial matters will claim that the being shown in the drawing might well depict an alien that once visited the area and interacted with the locals.
Kazhakstan is an area of intense UFO sightings and activity. Recently the Kazakhstan Government toyed with the idea of creating a UFO landing field and an alien embassy. 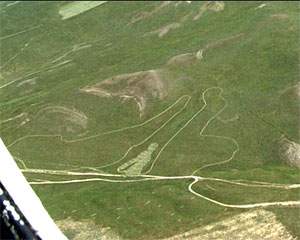 Not once is there a mention of any archeologist, or geologist for that matter verifying this claim.
I think the government of Kazakhstan is just scrounging for the tourist business.
UFO mysteries: ‘Nazca Lines’ discovered in Kazakhstan

The criteria for looking for extraterrestrial life has always been this; water as a solvent, carbon and oxygen.

This is simply because we only have a sample size of one to compare our results with; Ourselves.

In the search for extraterrestrial life, some scientists say we’re focusing too much on finding signs of existence as we know it, and in the process, we may be missing more strange forms of life that don’t rely on water or carbon metabolism.

Now researchers from Austria have started a systematic study of solvents other than water that might be able to support life outside our planet. They’re hoping their research will lead to a shift in what they call the “geocentric mindset” of our attempts to detect extraterrestrial life.

“With our current measurement strategy for life on other planets, we will only be able to detect life which shares most of its parameters with terrestrial life,” astrobiologist Johannes Leitner of the University of Vienna, who presented his research Friday at the European Planetary Science Congress in Germany, wrote in an e-mail. “Presently we will not be able to detect exotic life, because we have no idea of its potential properties and by this, our probes to planetary surfaces do not carry instruments which can look for something exotic.”

For instance, Leitner said, we can send rovers to Mars carrying antibodies that detect traces of chemicals and bacteria that would indicate life. But because we can only make antibodies to known substances, this method will be limited to finding Earth-like life.

“When we try to find a definition for life, in most cases, such a definition is more a summary of the specific properties of terrestrial life,” Leitner said. Because life on Earth requires water, most of the search for extraterrestrial life thus far has focused on the “habitable zone,” or the relatively narrow region around a star where liquid water could exist.

But while water is liquid only between zero and 100 degrees Celsius, other solvents are liquid over a much larger temperature range. For instance, because ammonia stays liquid at a lower temperature, an ocean of ammonia could exist on a planet much further from its host star. By exploring the properties of more potential solvents, such as sulfuric acid and formamide, the researchers hope to expand the potential life-supporting zone.

This is certainly an improvement, but will we still be able to decipher what we’re looking at?

Read the comments at the bottom of the post, pretty entertaining it is.

The Hunt for Extraterrestrial Life Gets Weird

Thanks today to The Anomalist.