The late conspiracy theorist Jim Keith, in his colorfully titled “Saucers of the Illuminati,” makes an interesting point about the simplicity of the quintessential alien face. Could it be, he wonders, that abductees’ brains manufacture the same predictable alien visage because the close encounter experience is so devastatingly weird, crammed with unfamiliar visual cues? Conversely, the minimalist alien head may be due to a scarcity of visual information; the abductee’s mind may “fill in the blanks” to encompass something essentially faceless.

When it comes to ufology and alien visitation, I try to keep an open mind on the subject.

What’s one person’s alien visitation is another’s religious experience. To me, it’s all one and the same. 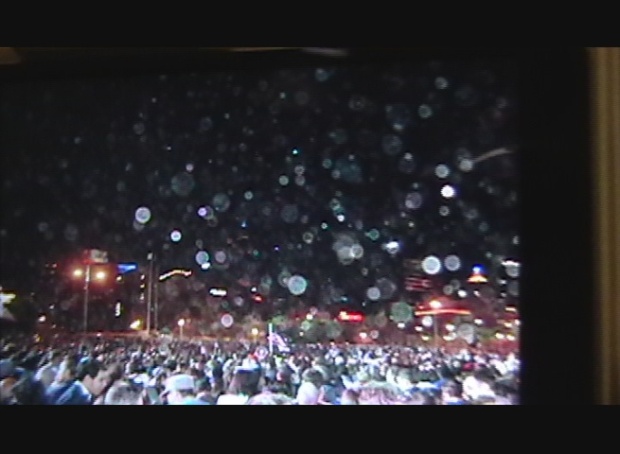 Hello,
These photos were taken at Obama’s victory rally in Chicago and forwarded to me. Clearly, many in spirit were celebrating too.

In this video I will show you across goggle sky. You will see what I believe to be UFO craft. I looked for things that don’t look like stars (because, certainly stars would be the only thing you would expect to see if there were no such things as UFOs.) So, looking for things out of the ordinary, which was actually quite easy I found the things included within the presentation. It seems a common phenomena that where we have these long lines, or beams within the sky maps, we often find UFOs. But I do wonder, what are these beams? They appear Dark, Blue, Red, or Green and are thousands of miles long. Are they giant long space craft? Laser beams? Trade routs? A glitch of Google sky? These beams are in abundance, and appear in most areas of the sky. Check out the large portion of the sky where the stars appear red in color (as apposed to bluish). This suggests that the photos here are taken with a different light filter to the rest of the sky. When you zoom in here, its easy, so easy to find hundreds of bright Green, Blue, and Red beams.

“Wheel in the sky keeps on turnin’…”

Railroad to the stars?

Earth to be paved over for new intergalactic spaceway system?